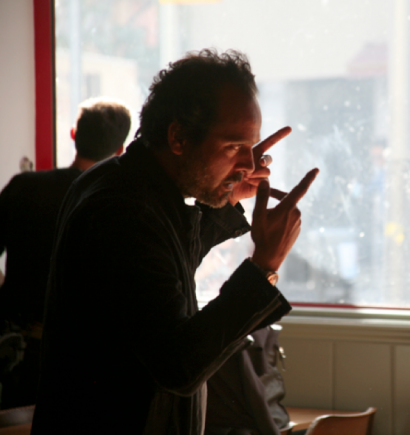 — Silver Lion at the Cannes Festival

— Gold and a Silver Medal at the New York Festival

— Gold and Silver at the Italian Art Directors Club

I was born in Milano on 13th November 1968. I studied and grew up in Milano and that’s where I started to work in a production house as an assistant producer.

I saw and selected hundreds of reels from all over the world, made excellent coffee for whoever was passing through, drove for directors who absolutely mustn’t miss flights. I had great fun and all that I did was very useful to help me understand the process of film production. Above all, I fell in love with this world and without saying it out loud, I began to believe that it could be the road that I should follow.

Certain directors I had come into contact with had faith in me and I soon found myself on set full time, initially as second and eventually as first assistant director. I did this for four years until a low budget script arrived and someone had to shoot it. I thought that I could do it; the others had confidence in me and the thing took off: 1993. The commercial was for candy, an adolescent girl the main part; by luck and by chance the first to come to the casting was a shy but ambitious girl. She looked right and was good; later Vicky was to become a famous DJ on Mtv, Le Iene etc.

I worked for the Italian market on a retainer for NEMO and BRW.

After that I never looked back, working mostly with actors (Stefania Rocca, Virna Lisi, Mariangela Melato, Anita Caprioli, Alessandro Gassman and many others less well known). I did a lot of Non Profit work with good ideas and almost always with great success. I won a SILVER LION at the CANNES festival, a gold and a silver medal at the NY Festival, one time at EPICA, twice at CRESTA, a gold at the ART DIRECTORS CLUB (social category), several KEY AWARDS. a gold MEZZO MINUTO (social category) and others I have forgotten.

When I had the opportunity to shoot a car commercial, I at first wondered whether I would be able to do it. But since then, this has become my main line of work. It is true that directors tend to be better at certain types of commercials but sometimes this degree of specialisation can become a trap.

In recent years I have travelled all over the world, finding myself in fascinating situations and places: Iceland, Morocco, Hungary, Argentina, Hong Kong, China, Emirates, Thailand. Each journey was important; it enabled me to discover and learn, to grow. During these years I worked with very many national and international agencies and as many clients. Euro rscg, Bates and Grey for clients such as Peugeot, Buick and VW.

In 2000 I shot another short film (14 minutes) based on short story by Gian Luca Favetto which was shown at various international festivals including Pescara where it was winner of the category: film and literature.I am working on several projects and I leave the cinema door wide open, but without too many illusions. I am very fortunate to work each day at a job which I enjoy and which I find fulfilling. For the rest, we shall see. I believe that all films present themselves as unexpected opportunities or as impelling necessities.