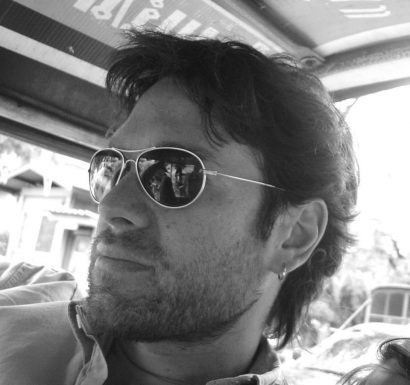 Fran started out his career at the age of 18, as a stage actor in Buenos Aires. While he was studying Social Communication at the Salvador University in Buenos Aires, he attended the Alejandra Boero Drama Academy for a 5-year period. As soon as he finished his studies he moved to the US. Los Angeles and New York received him to complete his formation. He attended Directing in Film classes in the Mark Travis Academy in LA and acting classes with Sonia Moore in New York.

When he came back he has a clear idea in mind: he wanted to be a director. He worked as a 2nd AD in two Nestor Lescovich feature films. Soon after, he started a long and profitable promenade on different film departments. He was a PA, then a postproduction assistant and after a while he spent 3 years as a 1st AD. Most of this work was accomplished in “Contemporáneos”, a top of the line advertising production company at that time.

Advertising was calling at his door.

While in “Contemporaneos” he met Flavia Moraes. She tempted him as a partner of her new company in Argentina, Film Planet. With no hesitation Fran accepted his new destiny. He made his debut as a commercial and music video director for Film Planet Buenos Aires.

After a few dozens of commercial as a Film Planet director he moved to Madrid in 2000 to work for Alamo films, where he continued to grow as a successful and award winning commercial director.

Additionally, in 2002 he ventured back to film directing the internationally acclaimed short “Hoy por tí, Mañana por mí”, awarded in over 20 film festivals, part of the official selection at Clérmont-Ferrand and nominated for the Goya award for best short film.

He was also selected and hired to do the video ensemble for the Nacho Cano play “Hoy No Me Puedo Levantar”, acclaimed by critics and audience all over Spain and Mexico.

In 2005 he co-founded with Antonio Ruiz and Dany Boyero a new production company, Indio Films, whose trajectory in the Spanish Market was especially relevant such as the spots produced by the company.

In 2013, Fran and Dany Boyero launch a new adventure; an “evolution” of all that the experimented and learnt of 8 years as workers and businessmen at Indio Films. Nowadays, “Republicana de Cine” responds to the values that they always believe to keep in addition to an contemporary style where young talents, no doubt about it, in the direction, the production or the animation field have a priority.

Fran’s style is characterized by his strong sense of storytelling, which relies on his skill for directing actors. His theater background has had a positive impact on Fran’s natural talent for communicating emotions and humor poignantly. He has a keen sensibility to convey strong feelings across his commercials, whether he’s portraying touching or humorous stories.