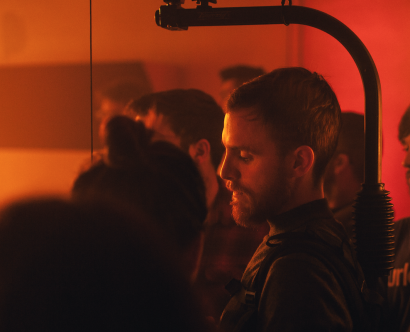 Born and raised in Madrid, Mr. Red’s interest in photography began at an early age playing with his father´s analog camera. At the beginning he dreamed about being painter, he was fascinated by the light he could find in the paintings of museums, so he developed his skills studying in a painter studio. He loved hyperrealism so much that he continues his passion with photography imitating the light of great painting masters.
He has worked as assistant of many photographers, one of them was Isabel Muñoz (Two World Press Photo Winner) in her studio and during her personal work travels who inspired his passion for portraits and analogue photography. Some years after he graduated in Cinematography at EFTI Cinema School and learnt from Bradford Young ASC ( last year Cinematography Oscar Nominated),  Andrzej Sekula (Pulp Fiction, Reservoir Dogs) , Chayse Irvin among others.
After several years working, in each project that he is involved: commercials, fashion films, short films or personal films, is always represented his love of the light and the searching for naturalness in an aesthetic way.
Currently working with advertisement clients as Swatch, Zara, Estee Lauder, Toyota, Canon Europe, Reebok, Sony among others and working as a photographer contributor on magazines such as Vogue or Esquire.
—————

Studied Image & sound degree at Puertabonita in 2008, Conceptual photography Master in 2010 and Cinematography studies both at EFTI.